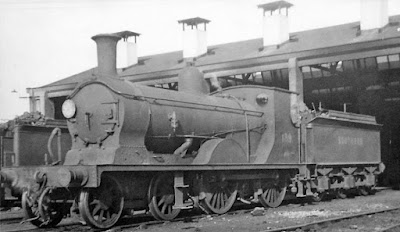 The OOWorks K10 'Small Hopper' is not to everyone's taste, one of the few classes of Drummond 4-4-0s that were not rebuilt with a superheater, they retained the short smokebox to the end. However, they have a charm of their own, essentially a late Victorian loco that lasted fifty years.

30382 was not quite the last K10 in service but it was only one to receive its BR number, the OO Works version was incorrect as supplied with a 6 wheel tender rather than the 8 wheel watercart that it pulled until withdrawal.

To correct this mistake, a Hornby T9 watercart has been adapted, this has the advantage of an 8-pin DCC interface and multiple pickups.  However it needed a modified drawbar and for the past year this has been the cause of the K10's poor running. The original drawbar was lifting the front two axles off the rails causing loss of power through the pick-ups. 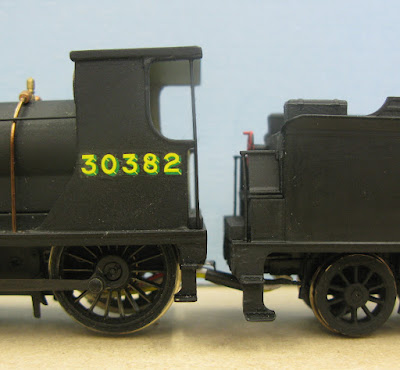 The solution was a strip of tinplate carefully cut from a Sainsbury's corned beef tin which whilst not ideal does work and as can be seen in the photo, all wheels are level......btw whilst the new drawbar was made, a pair of tantalum capacitors have found their way into the tender.